How does Dr. Cowell’s theory differs from other models?

memory but was not involved in visual perception. However, in an article for UMass Amherst News, Dr. Cowell explains that the segregated model of the brain, where different regions of the brain are each responsible for a single function such and language and memory, is not accurate. The “Swiss army knife theory…is unraveling,” she says. “Now it’s understood that the whole brain is involved in many functions.”

How will she test her theory?

By measuring activations within the brain as people perform memory and cognitive tasks while in the MRI scanner and comparing the results against the computer’s computational modeling that will make predictions about brain activation patterns. To do this, she will use the campus’s new functional MRI scanner so she can compare her computational models of the brain with what actually happens within real people’s brains. By conducting memory experiments on volunteers, some with memory loss and some without, her study will be able to test if her new model for brain function is accurate.  Dr. Cowell explains that “This should allow us to understand how brain activity is linked to behavior, in particular in the MTL, at a level not seen before.”

According to Dr. Cowell, “If we’re successful, it might reveal what amnesia does to the brain, and what neural activation patterns look like when you have amnesia and when you don’t.” She adds, “I hope to provide a unified theory of why the MTL is so important in memory and certain other functions, and to explain what those things have in common that makes the MTL so critical for an array of different functions.”

People with MTL damage often develop specific types of memory issues, such as the inability to distinguish subtle differences between similar objects. Though older theories stated that the MTL is dedicated solely to memory Cowell says it’s now clear that the MTL is important to other functions such as visually discriminating between similar things such as identical twins. This is part of high-level visual perception and for such tasks “you need a holistic representation, so the brain can put together all the features that make up each whole face, including the few tiny difference.” By testing her theory on both amnesia caused by brain damage and more moderate memory loss caused by normal aging, Cowell’s project will investigate whether these two forms of memory loss can be explained by the same mechanisms, thus partially unlocking one of the major mysteries of how our minds work.

More about Dr. Cowell and the University of Massachusetts, Amherst

Dr. Rosie Cowell received her BA from Cambridge and her PhD. From the University of Oxford, UK. She joined the faculty of UMass in the fall of 2013 and works for the Department of Psychology and Brain Sciences. This 5-year, Early Career Development (CAREER) grant from the National Science Foundation is its highest award in support of junior faculty who exemplify the role of teacher-scholars through outstanding research, excellent education and the integration of education and research in the context of the mission of their organizations.

Dr. Cowell is just one of the many outstanding research scientist at the UMass. Laboratory equipment suppliers interested in meeting face to face with UMass researchers should plan to attend the 2nd annual BioResearch Product Faire™ Event at the University of Massachusetts, Amherst on July 13, 2016. For more information contact a Biotechnology Calendar Inc. at (530) 272-6675 or click the link below. 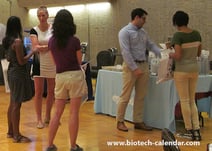