Green chemistry refers to a number of processes and practices that minimize the toxic or hazardous effects of chemicals in the environment, the lab, or the manufacturing plant. One way to go green is to cut down on the use of dangerous solvents in reactive processes, thereby reducing waste and improving lab safety. Though sometimes a less toxic catalyst or reagent can be employed from the outset, reused, or made inert eventually, another way to get a chemical reaction is to apply physical force instead. Called mechanochemistry, it involves the application of mechanical engineering to chemistry. Instead of adding a solvent, agitation is used to achieve chemical synthesis.

University of Cincinnati chemistry professor James Mack is an NSF-supported scientist who experiments with mechanochemical processes in his lab research. He is sharing his findings with other chemists at the American Chemical Society conference in New Orleans going on right now. In a recent press release, Dr. Mack discusses solvent-free synthesis (which is also the title of the chapter he authored in a prominent green chemistry textbook):

“The solvents comprise the large majority of chemicals that are handled, but the solvent doesn’t do anything but serve as a mixing vehicle. For example, for every gram of pharmaceutical drug that is generated, 15 to 20 kilograms of solvent waste is generated in that process. Mechanochemistry can develop new reactions that we haven’t seen before, saving on waste and developing new science.” 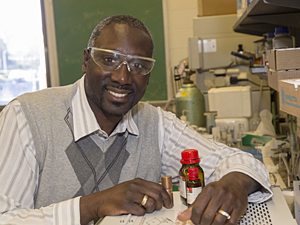 [Dr. Mack uses a metal reactor vial, which is a variation on the ball mill apparatus commonly used to grind or mix solids and/or chemicals. He is also working with chiral agents in stereochemical experiments. Photo courtesy of the University of Cincinnati.]

Green chemistry has gone from being a novel set of ideas a decade ago to a central set of best practice tenets for labs, manufacturers, and suppliers today. Though "green chemistry" might once have sounded like an oxymoron to diehard eco-folk (the abundance of chemicals in our daily lives seen as profoundly unhealthy and unsustainable), the notion that we can substantially alter our dependence on the more toxic aspects of chemical living has caught on. No longer a fringe movement, many labs are taking action to be as green as possible, and laboratory suppliers are keeping step. Green chemistry research is burgeoning, as the recent ACS conference program made clear with dozens of green chem sessions. The principles are fairly simple:

Biotechnology Calendar Inc. provides opportunities for laboratory research scientists seeking green chemistry products to meet suppliers of those products at our on-campus tradeshow events held across the United States at top research universities. Our Green Chemistry Shows™ bring together cutting-edge scientists with the suppliers and equipment professionals that make their labs function at optimum green efficiency.

We will be hosting our annual Cincinnati BioResearch Product Faire™  at the University of Cincinnati next on August 7, 2013. For a one-page free funding report and information about exhibiting, click the button below: