In the venture capital arena, biotech investments were up substantially in 2011, according to recent figures cited by FierceBiotech.  Some highlights of that VC funding news include:

Finally, in the private, philanthropic sector, a widely-published recent report by the Council for Aid to Education states that charitable contributions to colleges and universities rebounded from sluggish years to reach $30.3B last year. Key percentage increases from that report include: 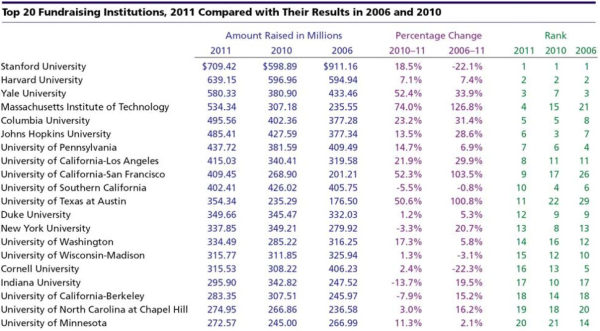 Biotechnology Calendar, Inc. is a full service event marketing and planning company producing on-campus, life science research trade shows nationwide for the past 19 years. We plan and promote each event to bring the best products and services to the finest research campuses across the country (including almost all of those listed in the chart above). Visit our website for information about upcoming shows in your area and to register to exhibit or attend. Or call to talk to one of our friendly, knowledgeable sales associates.