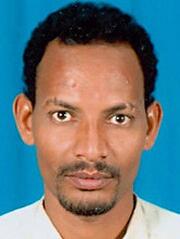 The most exciting life science research isn't that which is promising, but that which is proven.  Nothing speaks like a person who is alive because of a radical new procedure made possible by research translated into operable technology.  In the case of Andemariam Teklesenbet Beyene's trachea transplant earlier this summer, several biomedical players came together very quickly to save the young man's life.  One of those players was Harvard Bioscience Inc., which provided the incubator (or bioreactor) that "cultured" the man's own stem cells on a polymer trachea scaffold that then replaced the man's own diseased windpipe.

[Photo of Mr. Beyene courtesy of University of Iceland, via Mbl.is] 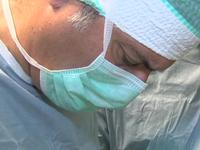 Building new organs from our own stem cells is one of the great dreams of biomedical science, and to a limited but very real degree it is already a reality.  Trachea transplants, for instance, have been performed successfully since 2008, with patient stem cells made to grow on a sterilized trachea from a cadaver donor.  But donated tracheae in the right size are sometimes hard to come by and rarely available in a situation like Andemariam's, which was nearing fatal.  The time was right to try the new procedure using a synthetic tissue engineered windpipe.

This is very much an international medical success story.  Harvard Bioscience is based near Boston, in the US.  The patient was Eritrean (East Africa), studying geography in Iceland when he became ill.  His doctor ultimately contacted an Italian surgeon, Paolo Macchiarini, who is currently working in Stockholm.  The polymer nanocomposite scaffold was produced by Alexander Seifalian at University College, London, who was given the detailed dimensions of the patient's own trachea to use as a model.  All of the components, along with the man himself, were flown to Stockholm's Karolinska Institute where Dr. Macchiarini performed the surgery on June 9, 2011.  A month later, NPR and news agencies around the globe reported that Andemariam was doing well and had returned to his studies. 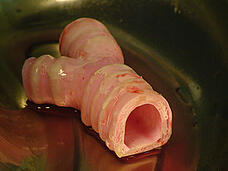 Perhaps the most remarkable aspect of this medical success story is that we are now able to produce an artificial material onto which we can place stem cells harvested from a human being and through a biomechanical procedure grow what is, ultimately, a living organ that performs like the original one in a patient's body.  Within days of incubating the cells with the high-tech trachea, it was ready to be transplanted.  It did not leak air into the man's chest cavity, as they feared it might, and after a short time, they confirmed that blood vessels were growing into the scaffold.  Future research may utilize an even more sophisticated, biodegradable scaffold that breaks down and falls away as the stem cells grow an entirely new organ.  (Wow.)

Harvard Bioscience used its InBreath bioreactor to culture the stem cells on the artificial tissue scaffold.  The InBreath machine was also used to stimulate seeded tracheae in Dr. Macchiarini's previous transplants using cadaver-donated parts.  Scientists at Harvard Bioscience responded quickly to the request for modifications to the device technology for the novel use of Seifalian's man-made scaffold: they worked around the clock to ready the InBreath for the time-sensitive procedure on Mr. Beyene.  Company president David Green describes the incubation process in an interview with NPR:

"The bioreactor serves to oxygenate the cells. It rotates the scaffold much the same way a chicken is rotated on a rotisserie. That allows the cells to be deposited evenly over the spongy scaffold."

Harvard Bioscience Inc. gets its name from its historic start, in 1901, in a Harvard University basement.  According to the company's website:

Frustrated by the poor quality of equipment then available, Dr. William T. Porter began manufacturing his own high quality physiology teaching equipment in the basement of the Harvard Medical School. Dr. Porter went on to found the American Journal of Physiology and became one of the leading physiologists of his day. His equipment gained an enviable reputation for quality and reliability and began to be known simply as the Harvard Apparatus.

Harvard Apparatus is the lead company among nine now under the umbrella of Harvard Bioscience, Inc. in Holliston, Massachusetts, producing tools to advance life science research and regenerative medicine.  Dr. Porter would surely be proud of this recent game-changing surgical event.

Update 12/23/2011: The first surgery was so successful that another has already been performed, and a third is planned.  As for Mr. Beyene:

"The patient has been doing great for the last four months and has been able to live a normal life," a British journal quoted Tomas Gudbjartsson, a professor at Landspitali University Hospital and University of Iceland in Reykjavik, as saying in late November. "For the last two months he has been able to focus on his studies and the plan is that he will defend his thesis at the end of this year."

If you are a biomedical equipment supplier or a life science researcher in the Boston/Cambridge area, plan on attending one of Biotechnology Calendar Inc.'s annual BioResearch Product Faire Events on the Harvard and MIT campuses held in March.  For dates on all of our Northeast Shows, visit our website.