The Jane Goodall Institute was established in 1977 when young researcher Anne Pusey returned from Africa with boxes of Goodall's hard data: handwritten observations of chimp behavior from what would become the Gombe Preserve in Tanzania.  Those boxes went with Pusey to the University of Minnesota, where the long process of curation and (eventual) digitation began.  The Goodall Institute now has its headquarters in Arlington, Virginia, where it focuses on education, community development, and conservation, as well as research and management of its chimp sanctuary in the Congo. 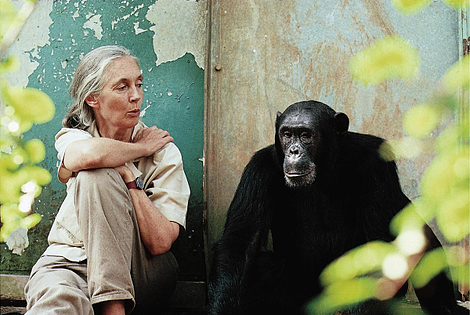 The 22 filing cabinets full of Goodall and other primatologists' Gombe field notes now reside at Duke University in the Biological Sciences Research Building, where they are still cared for by Dr. Pusey, Ph.D, Chair of the Department of Evolutionary Biology and recent transfer from Minnesota.  The process of archiving and analyzing data is continued by current generations of Biology students and faculty, some with ties to the University's famous Lemur Center.  Others may have their offices at Duke's Institute for Genome Sciences and Policy, which co-sponsored Jane Goodall's campus visit and lecture March 28th.  (Research on the primate genome and comparison to the human genome confirm Goodall's earlier observation of our similarities and provide insight into primate/human evolution.)

You might not think a 77-year-old British primatologist would excite a campus of young people in 2011, but tickets for Jane Goodall's lecture went on sale to Duke students and staff March 17 for $10 a seat.  They were sold out by the afternoon, and students were posting on the campus internet bulletin board that night hoping to find stray tickets.  Non-Duke primate fans never had a chance.  Goodall's talk was the culmination of a week-long event called Primate Palooza, an interactive "celebration of biodiversity conservation" that took place at Duke and UNC-Chapel Hill March 21-29.

Always pleased to be talking to young people about primates and conservation over her half century of work, Dame Goodall was additionally enthusiastic to see her years of data in their new home at the Duke Jane Goodall Institute Research Center with Dr. Pusey and her associates.  Introducing Goodall to the lecture audience, Pusey spoke of the revolution in scientific thinking that resulted from Goodall's method of watching carefully, with an open mind, and taking good notes.

(Click here for the full video of the lecture.)

If you are a supplier of laboratory equipment to the life sciences and would like to meet university research scientists, purchasers, and other industry reps, plan on attending the Biotechnology Calendar Duke BioResearch Product Faire™ Event on the Duke Campus April 21, 2011.