Researchers have known that sleep loss and disrupted sleeping patterns are some of the earliest symptoms of Alzheimer’s. WUSTL assistant professor of neurology Erik Musiek, MD, PhD took this fact and turned his thinking around: What if these sleep anomalies are more than just symptoms and are actually part of the cause of the disease?

With this idea in mind, Musiek studied mice lacking the internal clock gene known as Bmal1. Without this gene, mice lose their natural tendency to sleep all day and be active all night. Instead, they sleep sporadically throughout the day and night, without any set pattern. “They get the same amount of sleep, but it’s spread over the whole day. Rhythms in the way genes are expressed are lost,” explains Musiek in a recent WUSTL news release.

As these mice aged, they experienced a dramatic increase in brain damage compared to normal mice. Closer inspection revealed that the damage was caused by free radicals, which are natural byproducts of metabolic processes. This led Musiek to wonder why these free radicals weren’t also damaging the brain cells of the normal mice.

At this point, it became clear why the internal clock gene Bmal1 was so important. “Normally in the hours leading up to midday, the brain increases its production of certain antioxidant enzymes, which help clean up free radicals,” according to Musiek. This explained why the average mouse had nothing to fear from their own free radicals: a daily surge of enzymes neutralized the threat. “When clock genes are disabled, though, this surge no longer occurs, and the free radicals may linger in the brain and cause more damage.” 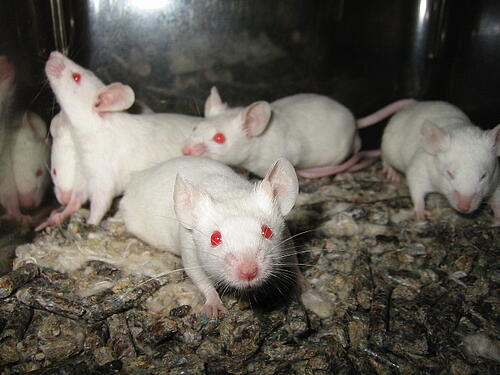 (Mice are generally nocturnal but a lack of Bmal1 can deregulate their sleeping patterns. Photo courtesy Wikimedia Commons and Aaron Logan)

Musiek found that this sort of brain cell damage can lead to other sorts of neurodegenerative diseases as well. His conclusion is that these internal clock genes regulate more than just sleep patterns, and warrant further research. If we are to find a cure for Alzheimer’s, perhaps it will begin with preserving our internal clocks as best we can.

This research was supported by funding from the NIH, an Ellison Medical Foundation Senior Scholar Award, the Cure Alzheimer’s Fund and an AAN Clinical Research Training Fellowship. For a more detailed report on research funding and university grants for the Washington University at St. Louis, read our WUSTL Funding Statistics Report:

Biotechnology Calendar, Inc. will be visiting Washington University in St. Louis on March 20th, 2014 for our St. Louis BioResearch Product Faire™ event, held annually on the WUSTL campus. This show is an excellent opportunity for life science scientists and laboratory equipment suppliers to network and discuss their research needs and solutions. To attend the St. Louis BioResearch Product Faire™ specifically, click the button below. For more show options, see our 2014 show schedule.