In order to study diseases that affect brain cells, such as Parkinson’s or Alzheimer’s disease, researchers rely on supplies of fresh, mature brain cells on which to conduct experimentation and trials. Currently, the development of brain cells in a laboratory environment is a lengthy and intensive process, typically requiring more than a year of growth time, plus associated work hours and r&d expenditures.

“Our work at the Allen Institute for Brain Science has revealed that the field of neuronal maturation is in great need of exploration,” says Christof Koch, Ph.D., Chief Scientific Officer at the Allen Institute for Brain Science. “This inspiring cohort of national innovators identified by the Foundation will make important advances using their own ideas, and we expect the resulting insights will in turn accelerate the Institute’s work to understand neural function and human cognition itself.”

With grants valued between $1 million and $1.5 million, six separate teams of researchers from leading universities were awarded funding for various projects involving neuronal maturation, including: 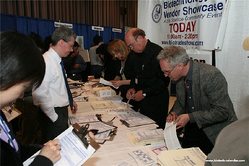 This set of grants represents a major influx of R&D funding for important projects at universities that are already among the most highly subsidized in the country for life science research. This is why Biotechnology Calendar, Inc. hosts annual industry leading events at UCSF, UCLA, Harvard, and over 50 other leading research institutions nationwide:

Researchers at top universities are constantly searching for the latest biotechnology and laboratory supplies, and BCI trade show events are where researchers go to buy them.

These are the most well-organized and popular life science events in the industry - where lab vendors make the most of their time meeting hundreds of active researchers and promoting lab products in one place.

For more information about promoting lab products at these or dozens of other top-funded research universities in 2015, click below: