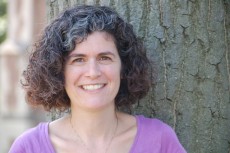 Levin and her group extensively studied reproducing bacteria and found that their secret lies in multiplying in rounds. That is, they start by copying a set of DNA, but instead of waiting for self-division to begin the next round of copying, they initiate multiple rounds of DNA copying before the first one finishes. This allows bacteria to perform seemingly impossible feats of replication: for instance, it takes bacteria forty minutes to copy its own DNA, but they can divide once every twenty minutes. 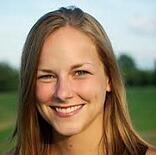 With this new understanding of the process of bacteria reproduction, the Levin lab set out to find ways to deter it. One of her doctoral students, Heidi Arjes(right), found that bacteria don’t like to be interrupted in the middle of their replication. If something stops the bacteria mid-copy, the bacteria employs a self-preserving method to avoid producing children with scrambled DNA. In particular, they turn into “zombies” that are incapable of reproducing. Arjes believes that a drug tailored to disrupt the DNA copying process would be a very effective way to stop bacterial infection.

“Most importantly,” she says in a WUSTL article, “if a bacterium has encountered a terminal cell-cycle arrest, it cannot recover even after the drug has been metabolized.” That is, it has no way of reproducing again regardless of how much time goes by, ensuring that infection stops dead in its tracks. Arjes adds that the proposed drug is a good alternative for antibiotics because bacteria can’t develop a resistance to it without changing their method of reproduction.

Levin and Arjes receive funding for their research partially from grants from the NIH. For a more detailed report on research funding and university grants for the Washington University at St. Louis, read our WUSTL Funding Statistics Report:

Biotechnology Calendar, Inc. will be visiting Washington University in St. Louis next on March 20th, 2015 for our St. Louis BioResearch Product Faire™ event, held annually on the WUSTL campus. This show is an excellent opportunity for life science scientists and laboratory equipment suppliers to network and discuss their research need and solutions. If you can’t make the St. Louis BioResearchs Product Faire™ event, not to worry: you can check our 2014 show schedule  and our 2015 show schedule for an upcoming show in your area.