Drugs for HIV have become adept at suppressing infection, but they still can’t eliminate it. That’s because the medication in these pills doesn’t touch the virus’ hidden reserves, which lie dormant within infected white blood cells. Unlock the secrets of this pool of latent virus, scientists believe, and it may become possible to cure – not just control – HIV.

In a study published Thursday (January 29) in Cell, researchers lead by Michel C. Nussenzweig, Zanvil A. Cohn and Ralph M. Steinman Professor  at Rockefeller University, and his collaborators describe new insights on which cells likely do, and do not, harbor this lurking threat. 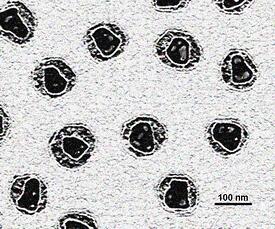 “It has recently been shown that infected white blood cells can proliferate over time, producing many clones, all containing HIV’s genetic code. However, we found that these clones do not appear to harbor the latent reservoir of virus,” says study author Lillian Cohn a graduate student in Nussenzweig’s Laboratory of Molecular Immunology. “Instead our analysis points to cells that have never divided as the source of the latent reservoir.”

HIV belongs to a family of viruses that insert themselves directly into the host cell’s genome where they can hide out quietly after the initial infection. HIV mostly targets CD4 T lymphocytes, a type of T cell involved in initiating an immune response.

When HIV integrates itself into the genetic code of a CD4 T cell, it may produce an active infection, hijacking the cell to produce more copies of itself in order infect other cells, and killing it in the process. Antiretroviral drugs that suppress HIV infection work by disrupting this hijacking. But the virus may also fail to produce an active infection, remaining a quiet, tiny fragment of DNA tucked within the host cell’s genome. If so, the drugs have nothing to disrupt, and the infection remains latent.

Most often, however, what happens is actually something in between. While the virus does manage to get at least some of itself into the T cell’s genome, problems with the process leave it incapable of hijacking the cell to replicate itself. But those few successful integrations still do damage, and the resulting depletion in the victim’s immune system leaves him or her vulnerable to potentially fatal opportunistic infections years, or even decades, after the initial infection.

“If a patient stops taking antiretrovirals, the infection rebounds. It is truly amazing that the virus can give rise to AIDS 20 years after the initial infection,” says Cohn.

Researchers think the reservoir of latent virus may be hiding out in a type of CD4 T cell: long-lived memory cells that help the immune system remember particular pathogens. When these cells encounter a pathogen they have previously seen, they spur the proliferation of T cells tuned to recognize it, in a process called clonal expansion. Prior research has suggested clonal expansion is crucial to maintaining HIV’s latent reservoir.

Following up on work initiated by Mila Jankovic, a senior research associate in the lab, Cohn and her colleagues examined cloned and unique CD4 T cells in blood samples from 13 people infected with HIV. An analytical computational technique developed by Israel Tojal da Silva, a research associate in the lab, made it possible to identify integration sites into which HIV had inserted itself within individual cells.

“Given the size of the human genome, it is highly unlikely the virus would insert itself in exactly the same place more than once. So, if multiple cells contained virus with identical integration sites, we classified them as clones. Meanwhile if a cell had a unique integration site, one not shared with any other cell, then we assumed that cell was unique,” Cohn says.

The researchers tested 75 viral sequences taken from the expanded clones of cells to see if they had the potential to produce more of the virus. None could.

“While we cannot rule out the possibility that a rare clone of cells may contain an active virus, it appears most likely that latent reservoir – and the potential target for therapies meant to cure HIV – resides in the more rare single cells containing unique integrations,” Cohn says.

With the scope of influence that Rockefeller has worldwide in the area of life science research, the needs for laboratory products to help bring this research to fruition is absolutely necessary.

Rockefeller University was ranked #1 by the CWTS Leiden Ranking for having the highest percentage of frequently-cited scientific publications of 750 top universities world wide. Additionally,  Rockefeller is a $1.7 billion marketplace. To have a presence this year at Rockefeller University and to present your laboratory products at Rock U on March 26th, click the button below.