Bioresearchers at the University of Illinois at Urbana-Champaign have invented an ingenious method for shining light on one of the most mysterious organs we have: the brain. Their tool of choice is a thin, flat LED that can be seamlessly and innocuously injected, causing minimum invasiveness and disturbance. The LEDs will help advance our understandings of bodily organs like the brain through the field of optogenetics.

Optogenetics is a fairly new branch of neuroscience that focuses on neurons in the brain that are sensitive to light. These neurons can be stimulated using light, allowing researchers to test neural functions in a more precise way: drugs or electrical stimulation cannot be confined to a particular area nearly as well as a ray of light can. 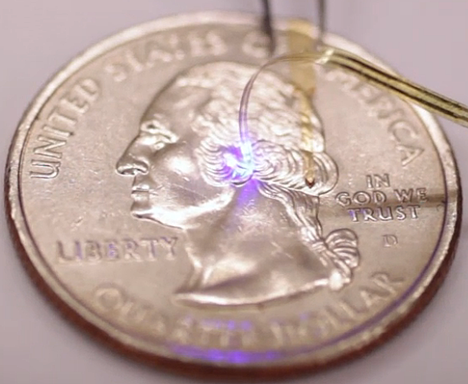 (The new LED, compared to a quarter for scale. Courtesy UIUC)

One of the major problems plaguing the field of optogenetics up till now is getting light into the brain in the first place. Most of the currently used methods involve embedding fiber optic cables into the skull and brain of the test subject and then shining a laser on those cables. Of course, this is not only a very invasive procedure, but also forces the subjects to stay within the cables’ range for the duration of the experiment. This is more than inconvenient for the subject; in addition, it hampers their natural behavior, skewing test results. 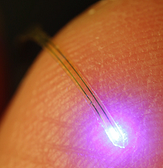 Here to brighten the day is our aforementioned invention: a set of LEDs that are almost as small as cells, attached to the end of a plastic ribbon. Said ribbon is thinner than a human hair and narrower than the eye of the needle, which allows it to maneuver anywhere in the brain without disturbing the tissue it passes by. In fact, the contraption is basically invisible once it has found its place: the tiny needle used to insert it comes right back out after insertion, leaving only that small amount of film.

With these LEDs safely and peacefully inside the brain, UI investigators like John A. Rogers can perform some interesting bioresearch. For instance, his lab found that applying blue light to a particular part of a mouse’s brain triggers a release of dopamine, giving the mouse pleasure without any external incentive like food. In a simple maze test, they found that if they shone the light every time the mouse passed a spot on the ground, the mouse would eventually gravitate toward that spot. This test was made possible by the fact that the mouse could move around freely inside the maze, unencumbered by cables or the like.

Rogers is excited about the possibilities of this new development. “These cellular-scale, injectable devices represent frontier technologies with potentially broad implications,” he says in a UIUC article, some of which go even beyond the brain. For instance, peripheral nerves in the leg respond to light stimulation to curb the pain they transmit. With these devices, pain management could be as simple as turning on the lights.

Funding for this research came from sources like the NIH, the U.S. Department of Energy, and the Beckman Institute for Advanced Science and Technology. To learn more about the funding supplied to bioresearch projects at the University of Illinois, Urbana-Champaign, request one of our free UIUC Research and Funding Reports below.

Biotechnology Calendar, Inc. is in the midst of hosting two of its on-campus trade shows at the University of Illinois in 2013: first, our Urbana-Champaign BioResearch Product Faire™ on May 1st, 2013 and then the Chicago BioResearch Product Faire™ today, May 2nd, 2013. BCI has been bringing top-notch life science trade shows to research universities nationwide for 20 years now. We hope to see you on campus, or at our next show: you can view our 2013 schedule of events to catch a show near you.