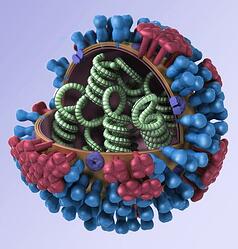 The Influenza A Virus (IAV for short) is an RNA virus that replicates in the nucleus of the host cell, which means it needs to carry out a number of precise steps in order to spread successfully, namely:

The protein that IAV manufactures for egress, called nuclear export protein (NEP), needs a certain amount of time to be ready to carry out its function. Once it is ready, though, there's no time to waste. Researchers in the tenOever lab experimented with splicing the NEP in such a way as to disrupt its timing mechanism. When it was ready too soon, the virus didn't have enough time to replicate and assemble enough progeny; when it was delayed, the body had sufficient time to prepare antibodies to wipe out the emergent virions (the viral spacecraft that transport the viral genomes to the next cell). If researchers can engineer a faulty protein, they can create defective viruses that can be used to innoculate potential flu victims, ideally with better results than current immunization strategies. TenOever describes the elegance of this approach in the NPR article:

"If you could simply look for small molecules that interact with this protein, you would essentially cause the virus to live in the cells too long, which would give our immune systems enough time to catch it red-handed."

Dr. tenOever has been a Pew Scholar in Biomedical Science since 2008, which has allowed him the financial and colleagial support to pursue his research into microRNAs at Mt. Sinai, which he discusses in this recent video:

Post-doc and graduate student researchers in the tenOever lab credited as co-authors in the recent Cell Reports article include: Mark A. Chua, Sonja Schmid, Jasmine T. Perez, Ryan A. Langlois. The work was supported by two NIH grants, the Pew Scholarship, a Mt. Sinai grant, and the Burroughs Welcome Fund. Additionally, Dr. tenOever has been the recipient of the Cozzarelli Prize in Biomedical Sciences (National Academy of Science), a Young Investigator Award from the
American Society for Microbiology, a Milstein Young Investigator Award from the International Society of Interferon and Cytokine Research, and a Presidential Early Career Award (PECASE) from the National Science and Technology Council. His lab is on the 16th Floor of the Annenberg Building on the Mt. Sinai campus in Manhattan.

To read our recent blog on the opening of a new science building (the Hess Center) at Mt. Sinai, click here.

If you are a science researcher or lab supplier interested in networking at Mt. Sinai School of Medicine, Biotechnology Calendar, Inc.'s 8th Annual Mt. Sinai BioResearch Product Faire™ event will be held on March 27, 2013.

For more information on Mount Sinai and the event itself, click the button below: