In two recent articles published on business websites, Duke University emerges as being especially strong in both industry research funding (as it matches public funding) and its position within a growing biotech hub (the Research Triangle formed by Durham, Raleigh, and Chapel Hill, North Carolina).  What these studies indicate is that Duke is succeeding as a research university in ways that its rivals may not be able to match and that bode well for its growth in the future.  Both articles suggest that one of Duke's strengths is its relationship to industry in the region, for developing its technology as well as bringing in new funding for its research. 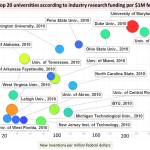 Measuring effective research innovation means looking at several types of indicators and statistics, and that's what tech transfer and university innovation consultant and analyst Melba Kurman does in a recent article: "Who does it best?" published on her website as well as innovationexcellence.com. In the category of Universities that attract the most industry research funding per federal dollar, Duke is the clear front-runner with the large red bubble (see chart at right; click it to enlarge). The size of the bubbles indicate how much industry funding the university got in a given year (2010).  What is perhaps most interesting about the analysis is that Kurman divides total industry funding by total federal funding for each institution, which has the result of indicating which universities are especially high performers, attracting large amounts of industry funding for their size and relative amount of resources.  The other two indicators Kurman's analysis looked at were publications and inventions.

Kurman seems to find the industry funding most significant, commenting on its role as a strong marker of successful knowledge transfer, noting:

Quantifying informal knowledge exchange between university and industry scientists is notoriously difficult. Yet, industry funding is a strong proxy that indicates the value and intensity of the informal interactions between a university’s and industry scientists. Turns out that the amount of funding a university researcher receives from a company is likely to be the downstream result of having strong connections in the chimerical, yet widely acknowledged informal channel of university knowledge transfer.

In a second recent article, "New Biotech Clusters in the U.S. Are Scrambling to Challenge Established Regions," from Genetic Engineering & Biotechnology News (GEN) and written by senior editor Alex Philippidis, the Raleigh-Durham Research Triangle is listed among the top emerging bioclusters successfully challenging the traditional biotech hubs.  In fact, Philippidis counts the top three clusters identified by a prominent real estate market analysis company as hardly being challengers at all, but rather already solidly in the game.  Those top three centers are (in order of importance according to the report):

Demographics for ranking include:

At a time when big pharma is consolidating and even growing in the two largest US biotech centers (Boston and San Francisco), the well-established challengers are faring well for what they can offer that the big two can't: space and affordability.  In fact, by those criteria, Seattle drops off the list, and North Carolina's Triangle edges out Minneapolis.

For an example of what is involved in expansion within a dense metropolitan area, consider San Francisco's Mission Bay biotech development, which required herculean measures and expenses by the city, private industry, and UCSF supporters over a decade to become a reality.  While SF-founded Genentech still has a research presence on the new campus, growth has required that its much larger manufacturing, clinical and administrative facilities are located 50 miles outside San Francisco (on 100 acres), 26 miles outside of San Diego (on 60 acres), and 20 miles outside of Portland (on 75 acres).

Duke joined with other universities, state and local governments, and industry interests as far back as 1959 to purchase and begin developing the 7,000 acres, mostly in Durham County, that make up the phenomenally successful Research Triangle Park. This proximity to industry and potential for physical expansion are factors in Duke's success at matching its public research dollars with private ones (as in the above study), as well as situating it comfortably for future growth in the region (the second study).

If you are a supplier of life science research laboratory equipment in Durham, come to Biotechnology Calendar Inc.'s Duke BioResearch Product Faire™ trade show event April 19th, 2012. This annual event, now in its 13th year, is an excellent opportunity to network with researchers, lab managers, purchasing agents and other industry professionals to showcase and discover the latest in laboratory technology.