The old days of doors being closed to women in the sciences seem to be at an end, at least if Google has any say in the matter.  With the finale of their 1st annual Science Fair competition on July 11, Google announced the three winners (out of 10,000 young scientists from around the world), and they were all young American women engaged in bioscience research.  The contest allowed projects in any science field, and gender was not a selection category for the winners, though age was.

The winners from each age group and their research projects were: 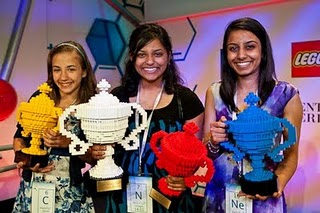 Ms. Bose was also the Grand Prize Winner.  In addition to $50,000 and an internship at the European physics institute CERN (one of the sponsors), she also won a trip to the Galapagos Islands with National Geographic (another sponsor).  She has been doing cancer research in Ft. Worth, Texas, under the supervision of Dr. Alakananda Basu at the University of North Texas Health Science Center for several years now, where Dr. Basu is a professor in the Dept. of Molecular Biology & Immunology.  Shree was featured on a Texas television news program when she was only 16 and she has entered her research in other contests, including the Intel International Science and Engineering Fair that ended in May this year.

Through testing both resistant and sensitized ovarian cancer cells, it was observed that AMPK inhibition has different effects on cell death induced by cisplatin treatment in cisplatin-sensitive and resistant ovarian cancer cells. By using flow cytometry, cell staining and western blotting techniques, this experimentation provides proof that AMPK plays a role in the development of resistance to cisplatin.

The video above was released in January to announce the Google Science Fair.  It's a snappy, fun, 1.29-minute invitation to join the global competition, but in hindsight it seems to envision slightly different contestants from those who ultimately made up the group of 15 finalists.  The science experiment in the video is a bit of mechanical engineering whimsy.  There is a photo of a spaceship, though none of the finalists were budding astronomers.  The music is French/international, but though entrants were from 91 countries, all of the winners were from the US.  Bright, serious, conscientious American female bio-scientists won the day.

One of the judges of the contest made the comment (quoted in a Google video), that, after all the projects were in, the level of quality and seriousness came as a real surprise:

"I've been absolutely BLOWN AWAY by the standard of the projects."

At the July 11 finalists' assembly and announcement of winners at Google headquarters in Mountain View, California (Silicon Valley), Executive Chairman and event MC Eric Schmidt congratulated all of the 15 finalists.  In addition to the notoriety and the all-expense-paid trip to the Bay Area (from as far as South Africa, in one case), Schmidt assured them that they all had future jobs at Google, if they wanted one.  Not a bad fall-back plan, though with their ambition and brains, it seems unlikely these teenagers will be giving up their laboratory dreams any time soon (even for Google).

(Photo, logo, and video all courtesy of Google Inc.)

Biotechnology Calendar, Inc. is a full service event marketing and planning company producing on-campus, life science research tradeshows nationwide for the past 18 years. We plan and promote each event to bring the best products and services to the best research campuses across the country.  Visit our website for information about upcoming shows in your area.