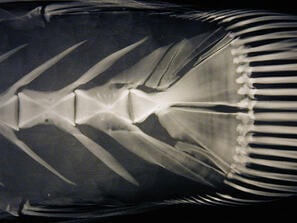 (All photos courtesy of Scripps/UCSD)

When marine biologist Richard Rosenblatt went out on expedition to the waters off Mexico in the 60's and 70's, he brought back so many fish specimens that Scripps couldn't house them all for lack of space.  So quite a few stayed bottled up in alcohol, sitting in storage.  Then in 1999 another Scripps researcher, Dr. Phil Hastings, took over curatorship of the Rosenblatt collection, and a move generated the space needed to add the other fish to the Marine Vertebrate Collection, which is used by scientists all over the world.  But still the bottles and jars remained closed.  Figuring out what was in them and logging that information would be a major undertaking and a considerable expense.  Now, at last, it is happening, and for fish scientists at SIO, it's Christmas morning. 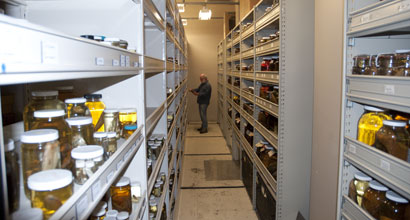 Here's how the NSF Award will allow Scripps' Marine Vertebrate Collection to grow:

Since Rosenblatt’s fish collection represents the marine ecology of 40 or more years ago, the specimens and their accompanying documentation will allow today’s ichthyologists to do comparative studies with current fish populations and chart changes in the biomarine environment.

On a somewhat different funding note, having more to do with SEALS than fish:

Scripps has just received a trio of grants from the Department of Defense to support research with military applications.  The Defense University Research Instrumentation Program (DURIP) awarded federal grants to these three Scripps projects that will improve naval instrumentation capabilities:

The Director of research in the Office of Naval Research, Dr. Michael Kassner, congratulated the awardees, adding:

UCSD received a total of 6 DURIP grants this cycle, including the 3 awarded to Scripps researchers.  The total amount of all DURIP grants just announced is $37.8 million, going to 83 academic institutions, with awards expected to range from $50,000 to $990,000 and averaging about $230,000.

If you are a life science researcher or laboratory supplier in the San Diego area, plan to attend the next Biotechnology Calendar, Inc.  San Diego Biotechnology Vendor Showcase™ Event. This life science laboratory product show and research networking event is held twice-annually on the UCSD campus.  The event, now in its 18th year, is an excellent opportunity to meet and exchange ideas with life science and medical science researchers and to learn about up-to-date laboratory products, science supplies and analytical equipment.  This San Diego Research community event will next be held on August 25, 2011.