In 1995 Utah chemical industrialist Jon Huntsman donated $151M—$100M directly from family funds—to the University of Utah Medical Center in Salt Lake City to create a top-notch cancer center bearing his family's name: The Huntsman Cancer Institute (HCI).  Further contributions over the years brought Huntsman support to $300M. Now the family has made another gift to the Center in the amount of $41M, which HCI says will be used to hire more researchers and acquire new treatment technology.

This donation comes at a time when the Huntsman Cancer Hospital is nearing the end of a huge expansion project. The original building, completed in 1999, contains 242,000 square feet; the $102M extension will add 156,000 square feet and include 50 in-patient beds along with increased space for diagnostic and examination rooms. [Photo courtesy of HCI]

The HCI Hospital expansion is part of the University of Utah's revised master plan for its 1534-acre campus, which includes many new buildings (see our recent blog on the Sorenson Molecular Biotechnology Research Building due to open soon).  According to the master plan, the University of Utah will spend over $1 Billion on new facilities and upgrades, $780M worth of which is already under construction and $45M more been approved. 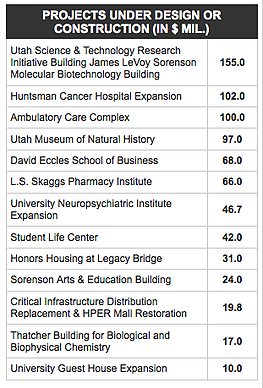 Of particular note for life science research scientists and equipment suppliers is the $17 Million Thatcher Building for Biological and Biophysical Chemistry, which will include:

The Thatcher Building will dramatically expand and update facilities for the Chemistry Department at the University of Utah, which is currently housed in the 40-year-old Henry Eyring Building.  According to department chairman Henry White: 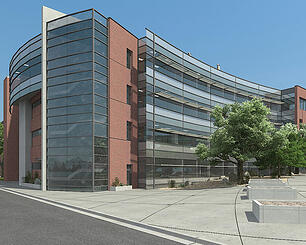 “The new building will increase collaboration between research groups that specialize in organic and biochemical synthesis, spectroscopy and mass spectrometry, and biophysical modeling and simulation, and thereby attract and retain high-profile researchers to the faculty.”

In another blog of ours, on Ohio State University in Columbus, we commented that OSU had taken a major step forward in bringing its bioscience research to market in hiring Brian Cummings away from the University of Utah as its Vice President for Technology Commercialization (Utah lured him from a successful stint at the University of Texas). Cummings was part of an aggressive move on the part of Utah to commercialize more of its intellectual property by creating start-ups, bringing in venture capital, and expanding its technology infrastructure.  The result was a record number of start-ups that effectively put Salt Lake City on the map as a biotech hub, which it continues to be.

“Utah is in the ranks of the big boys now,” says Ross DeVol, economic research director at the Milken Institute, a California-based nonprofit that periodically evaluates the 50 states on their success at converting R&D into products, companies, and high-paying jobs. Known more for coal mines and oil refineries than for a high-tech business culture, Utah placed near the top in 2010 rankings recently released by the Milken Institute and by the Washington, DC–based Information Technology and Innovation Foundation (ITIF), which independently conducts a similar assessment. ©2011 American Institute of Physics

A key difference between the University of Utah's previous master plan and its new one is the reorientation of the physical campus away from a drive-away tech park with commuter students to an interactive, more centered and vibrant place where people stop and engage with each other.

An excellent opportunity to network and engage with biotech researchers, lab managers, and other life science professionals in the Salt Lake City area is the Biotechnology Calendar BioResearch Product Faire™ Front Line Event on the University of Utah campus, being held this year on September 15.  Research attendees are pre-qualified at this popular focused trade show event that offers good ROI and meaningful face-time to generate long term sales leads.