The arena of renewable energy has expanded to include a number of different methods and natural resources. At Michigan State University, a new and unlikely contender has entered the scene. Decomposing microorganisms are the key behind the university’s incredibly efficient anaerobic digester, which they put into operation this Tuesday.

An anaerobic digester, put simply, is an airtight container for biodegradable waste. Inside lives a colony of microbes that specialize in decomposing. The container is kept at about 100 degrees Fahrenheit, which is the optimal temperature for these organisms to do what they do best. This degradation produces biogas like methane, which is the digester’s energy output.

(A shot of the new anaerobic digester, courtesy of MSU)

The idea of using microorganisms to turn our waste into energy isn’t a brand new idea, but MSU’s digester is the largest and most efficient model on a U.S. college campus. Project overseer Dana Kirk (below left, courtesy MSU), who works in the Department of Biosystems and Agricultural Engineering, adds: “Only about 20 percent of the energy we produce is being used to sustain the process…The other 80 percent is available for other uses on campus.” 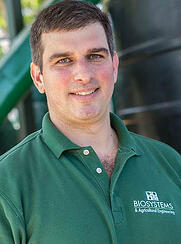 The 450,000-gallon container is expected to hold about 17,000 tons of biowaste, which will come in the form of cow manure from the campus dairy, food scraps from the university dining halls, fruit and vegetable waste from the Meijer Distribution Center in Lansing, and fat and grease refuse from local restaurants. With this constant, inexpensive source of fuel, the anaerobic digester will generate 2.8 million kilowatt hours of electricity per year. This output is expected to pay for the cost of the project in less than 15 years.

This is actually the second such digester on the MSU campus, but the first to be so productive. In fact, it has inspired the team to build more as part of a sustainability project in Costa Rica. There they will provide a cheap, abundant source of energy to bolster the local economy and quality of life in the hosting villages.

Funding for this $5 million piece of equipment came in the form of grants from the Michigan Public Service Commission ($1.5M) and an anonymous private southeastern Michigan foundation ($1.5M). You can read a full report on funding information for MSU with our Funding Statistics report, below:

The new anaerobic digester at Michigan State University is an extremely green solution overall, making use of existing biowaste and converting it into a renewable energy source. Biotechnology Calendar, Inc. fully supports research geared toward a greener future and hosts a selection of Green Chemistry Shows™ with a focus on showcasing laboratory products that minimize waste and maximize efficiency. Biotechnology Calendar is a full-service event marketing and planning company producing on-campus life science research tradeshows nationwide for going 20 years. For a broad selection of our shows with a green focus, see our Green Chemistry Show Schedule. If you’d like to attend one of our other nationwide shows, have a look at our 2013 schedule.