Innocuous as they seem, fungi can seriously threaten many forms of life. We saw this May how a fungus can destroy soybean crop, and how a UIUC geneticist developed a method to overcome it. Now, another life science researcher from the University of Illinois, Urbana-Champaign is taking up arms against a fungus that threatens the entire North American bat population. 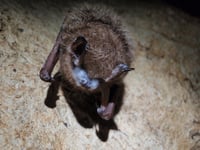 What does a fungus have to do with the survivability of bats? A particular fungus known as Pseudogymnoascus destructans is responsible for the recent outbreak of white-nose syndrome, a fungal infection named for the altered nasal coloring of infected bats (image left, courtesy Wikimedia Commons). Called WNS for short, the disease has claimed more than 5.7 million bats in North America and continues to spread at an alarming rate.

Mycologist Andrew Miller and his graduate student Daniel Raudabaugh are trying to assist the bat population by searching for a natural treatment for the fungus. Ideally, such a treatment could simply be placed in bats’ habitats with minimal disruption. ”We’re looking for a microbe that’s already associated with bats, that lives in the cave environment and is not a problem for people or other cave life,” says Raudabaugh in a recent UIUC article. 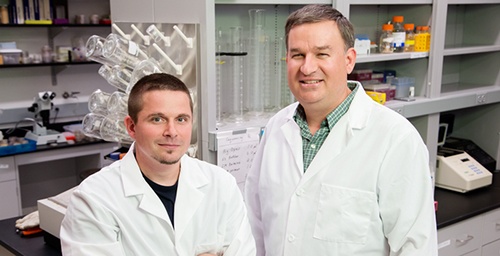 “The goal is to preserve as many of the natural species as possible while eradicating P. destructans,” Raudabaugh continues. “That is the hope. And so far, it looks promising.”

The duo is optimisitic because they have already discovered a type of yeast that produces a compound that inhibits P. destructans. Known as Candida albicans, the yeast is commonly found in humans. More importantly, it is found in several caves in Europe where bats are known to resist white-nose syndrome.

Raudabaugh tested the compound on P. destructans and on several other cave fungi and found that it only majorly inhibited the offending fungus. This offers hope that C. albicans won’t disrupt other cave dwellers if it is used to help the bats.The team’s next objective will be to determine the yeast’s impact on more of North American cave wildlife in order to evaluate whether it can safely be introduced into the ecosystem.

The Illinois Department of Natural Resources State Wildlife Grants Program and the Endangered and Threatened Species Program of the INHS supported this research.  More funding information related to the University of Illinois, Urbana-Champaign and the research it conducts can be found using the link below: