In the process of growing and studying neurons in the lab, life science researchers often use flat platforms or dishes. But neural networks in the body don’t lie on a flat plane or platform. A research team from the University of Illinois, Urbana-Champaign decided to add a new dimension to neuron study by developing a 3D environment to study neural networks.

The brain provides an environment for neurons that is difficult to replicate. In particular, it is squishy and three dimensional with lots of folds and crevasses for neurons to settle into. Previous studies have attempted to create a more brain-like setting using glass or metal plates with curves and channels carved into them. Of course, this isn’t quite representative of the brain’s composition.

UIUC professor Xiuling Li and her graduate student Paul Froeter devised a better solution in the form of a scaffolding of pliant microtubes. The tubes are approximately as wide as the neurons and as long as the width of a human hair. A full three dimensional structure of these microtubes allows neurons to grow and interact much more like they do in the brain. As an additional bonus, Froeter even designed the tubes to be transparent so that the team can observe the neurons with just a standard microscope.

“This is a powerful three-dimensional platform for neuron culture,” says Li in a UIUC news article about the study. “We can guide, accelerate and measure the process of neuron growth, all at once.”

Perhaps the most impressive part of the study was also the most unexpected. The neurons did enjoy growing in the microtubes; so much so, in fact, that they grew 20 times faster than in the body. This opens up the possibilities of interesting clinical uses, like accelerated regrowth of damaged or destroyed nerve systems. “If we can grow lines of neurons together in a bundle, we could simulate what’s going down your spine or going to your limbs,” says Froeter. “Then we can take mature cultures and sever them, then introduce the microtubes and see how they regrow.” The team now has two main goals: to create microtube networks that closely mimic particular parts of the body, and to place electrodes in the microtubes to get information about the electrical interactions of the neurons. 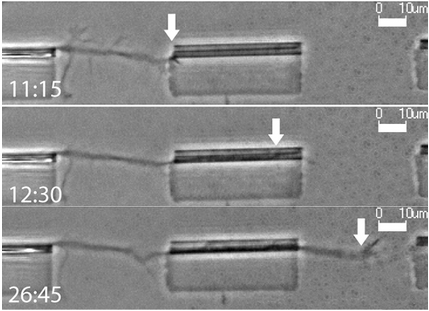 (A time-lapsed record of a neuron entering and exiting a microtube. Courtesy UIUC)

Funding for this study came from the Andrew T. Yang Research Award, the National Science Foundation and the National Institutes of Health. More funding information related to the University of Illinois, Urbana-Champaign and the research it conducts can be found using the link below: