Researchers at the University of Chicago have developed a new spectroscopy method that has the potential to help scientists better understand certain molecular processes, ultimately helping them create future treatments for different viruses.

Through the strategy known as lethal mutagenesis - a process that causes too many mutations within a virus so that the virus cannot manage the changed genetic material and dies - researchers from both the  University of Chicago and Massachussetts Institute of Technology are gaining a better understanding of how an anti-HIV drug is able to cause these lethal mutations within the HIV virus.

Andrei Tokmakoff of the University of Chicago Department of Chemistry explained that "in order to make this [lethal mutagenesis] work, you need a stealth mutagen. You need something sneaky, something that the virus isn’t going to recognize as a problem.”

Shape-shifting molecules known as tautomers are the solution to this problem.

Previous research has shown that the molecule KP1212 has the ability to resemble DNA, and is able to bind to either cytosine or adenine. When KP1212 is paired with adenine, it can cause mutations. Known as a tautomer, KP1212 is able to change molecular shapes depending on what it is bound to. (An example of a tautomer, changing molecular shape, image on right.)

The researchers in Chicago and Boston used a two-dimensional spectroscopy method to study tautomers, so see how they cause mutations. They found that these molecules are able to shape-shift extremely quickly, in 20 billionths of a second. Along with seeing how quickly this process can happen, the research team also found that there are many more forms of tautomers than they originally thought, bringing about more molecules that could potentially be used as treat viruses.

“KP1212 is about 20 percent of the way toward being an ideal therapeutic mutagen. The hints given to us by the spectroscopy guide us toward even better mutagenic molecules,” explained John Essigmann, leader of the MIT team on this project.

Using two-dimensional spectroscopy for further research into tautomers, new therapeutic treatments for HIV and other dangerous viruses such as Hepatitis C and influenza could potentially be created.

(Image below via Wikimedia Commons) 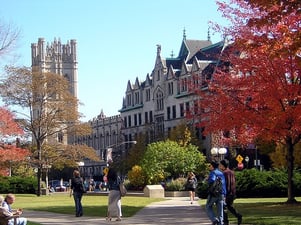 The University of Chicago is a leading research institution. Millions of dollars are donated and granted to the university annually, helping support on-going research and fund the start-up of new projects.

- Ludwig Cancer Research gifted $90 million to the University of Chicago for research on cancer metastasis.

Interested in marketing lab tools and technologies to researchers at this multi-million dollar institution?

Biotechnology Calendar, Inc. has been producing table-top life science trade shows at top research institutions for more than 22 years, and is pleased to be holding the 1st Annual BioResearch Product Faire™ Event at the University of Chicago on Tuesday, October 6, 2015.

At this event, lab suppliers are able to:

To learn more about participating in the BioResearch Product Faire™ Event at the University of Chicago on 10/06/15, and to get more funding stats for the university, visit the link below:

While in Illinois, consider making the most of your time by participating in the 2 other shows in the area: