Depending on who you ask, antibiotics are the best and worst defense against disease-bearing bacteria. On the one hand, they are very effective and easy to administer. Unfortunately, the more we use them, the more bacteria learn to thrive in a so-called “antibacterial” environment, culminating in a worst-case scenario where all bacteria are entirely resistant to antibiotics. Fighting against that future are bioresearchers from the University of Illinois, Chicago, who are pursuing more clever ways to prevent microbes from diseasing us.

Attacking bacteria directly is ultimately guaranteed to end in failure. The rate at which they adapt and evolve to resist each new assault is staggering. UIC professor of medicinal chemistry Michael Federle (left, courtesy of uic.edu) has no doubt that “we’re losing the war with bacteria,” since “every antibiotic we’ve come up with has some level of resistance.” His idea is to instead look at how bacteria communicate, a method known as quorum sensing. Quorum sensing is how bacteria decide what genes to express, when to invade a host, and how to defend themselves against danger. Even the most resistant superbugs rely on quorum sensing- which is why Federle is studying how we can take advantage of it.

The idea of tampering with bacterial communication to neutralize bacteria as a pathogenic threat is known as quorum-sensing inhibition (QSI). QSI is an increasingly promising method of avoiding bacteria-borne disease without the drawbacks of antibiotics. “If we can manipulate bacteria by understanding the chemical signals they use, then we can interfere with the bacteria’s ability to make people sick,” says Federle in a UIC news release. “We’ll try to fool the bacteria by artificially stimulating them.”

Professor Federle is one of ten scientists in the United States to receive the Burroughs Wellcome award, a $500,000 grant presented to researchers pursuing novel disease-fighting methods. The scope of his study extends to streptococci (the harbingers of strep throat), meningitis, and necrotizing fasciitis (which eat human flesh), bacteria that are all extremely resistant to antibiotics and thus difficult to fight in today’s medical arena. 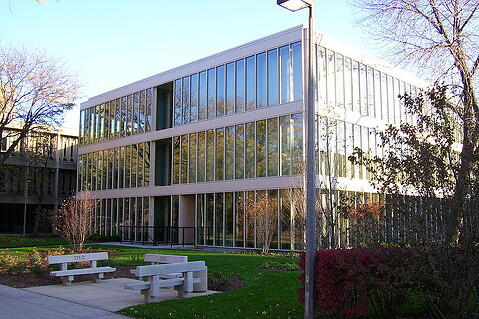 The Burroughs Wellcome award is just the beginning of funding success at UIC.  In fiscal year 2013, which just ended on June 30th, 2013, the university earned a total of $428 million in research funding, grants, and gifts. This is a new record for UIC, whose previous annual high was $367 million.  With studies like Federle’s, the university will certainly continue to rise in financial stature. For more detailed funding information about this thriving research and development marketplace, read Biotechnology Calendar’s complimentary University of Illinois, Chicago Funding and Vendor Statistics report.

Biotechnology Calendar, Inc.  makes an appearance the UIC campus each year for its Chicago BioResearch Product Faire™. If you're in the area, we also host the Urbana-Champaign Bioresearch Product Faire™  on the UIUC campus. Biotechnology Calendar, Inc. is a full service event company that has produced on-campus, life science research trade shows nationwide for the past 20 years. If you are a university researcher or a laboratory product vendor, consider attending one of our on-campus trade shows: here is our 2013 schedule of shows.