National Jewish Health in Denver is the #1 respiratory hospital in the United States and the only institution in the world dedicated exclusively to respiratory, cardiac, and immune diseases.  Researchers at NJH's Center for Genes, Environment & Health (CGEH) have recently published the results of an important study that identifies a genetic variant for ideopathic pulmonary fibrosis and its cousin familial interstitial pneumonia.  Both are fatal diseases involving progressive lung scarring; some 40,000 people die annually of the little-understood and untreatable conditions. 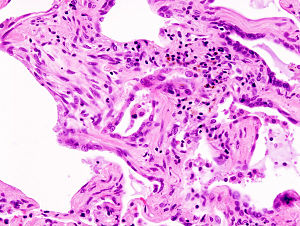 The NJH study was NIH-funded and involved sequencing the entire genome of 82 families with an instance of pulmonary disease and analyzing the resulting data statistically.  What researchers found was a variant involving a mucus gene (named MUC5B) that increases a person's likelihood of developing the disease by 7-22%, depending on whether the individual carries one or two copies of the gene.

Dr. David Schwartz was the principle investigator in the MUC5B study; he teaches medicine at both the University of Colorado School of Medicine and National Jewish Health and is the Director of CGEH.  In the following video he explains the significance of the study results (the gene was "never known previously to be involved in the development of pulmonary fibrosis") and what directions their science research will go in based on those results, namely:

The MUC5B study relied upon the contributions of these other science research institutes as well as National Jewish Health: Univ. of CO, CO School of Public Health, Duke, NC State, Vanderbilt, Landspitali (Iceland), TX Anderson Cancer Center, Univ. of Miami, and the NIEHS.

Dr. Schwartz also took a lead role in the Lung Genomics Research Consortium (LGRC), an $11 Million NIH-funded 2-year collaborative research project begun in 2009 to study the genetic and molecular biology of two fatal lung diseases: pulmonary fibrosis and COPD.  Schwartz said of the benefits of the work at the outset:

"The genetic, epigenetic, transcriptional, and phenotypic data we generate will provide an unprecedented window into the origins, dynamic biological features and unique presentations of these diseases."

The NIH sub-agency for the LGRC study was the National Heart Lung and Blood Institute, which also contributed laboratory samples from its Lung Tissue Research Consortium biorepository, which already contains over 1500 carefully-analyzed tissue samples and is added to every year.  Researchers from National Jewish Health, University of Colorado, University of Pittsburgh, Dana-Farber Cancer Institute, and Boston University participated in the consortium's study that produced an online data resource (or virtual roadmap) for the benefit of ongoing and future science research trying to accurately define and understand these deadly lung diseases.  The website www.lung-genomics.org was launched in August 2010.

If you are a pulmonary, oncological or other biomedical researcher, lab manager, or supplier of science research equipment, put June 24 on your calendar and sign up to attend the BioResearch Product Faire™ Front Line event held on the National Jewish Health campus.

Biotechnology Calendar Inc. is an 18-year veteran producer of full-service industry trade shows and prides itself on actively creating quality networking opportunities for scientists and lab equipment providers.  We held our first University of Colorado, Denver show on the Anschutz Medical Center Campus last year.  It was so successful that we have increased the capacity and breadth of that event (on June 23 this year) and will hold this first National Jewish Health exhibitor trade show on June 24 in 2011.  We look forward to meeting you there!