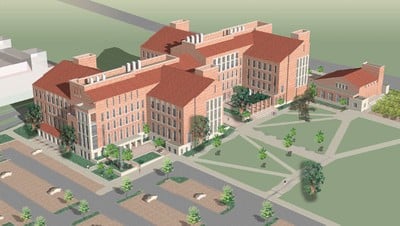 (Photo courtesy of University of Colorado-Boulder)

In anticipation of the completion of the 257,000-square-foot facility (more of a complex or mini-city than a building, with "neighborhoods" and a "main street" running through the center), CIMB has made several important faculty hires. 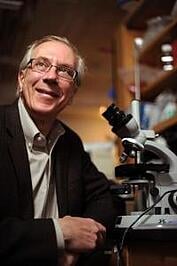 Most notable of these new hires is the 1989 Nobel Prize winner Tom Cech, who recently spent a decade as president of the Howard Hughes Medical Institute in Maryland.  His return to CU is considered very promising news for Colorado's bioscience industry as well as for the University.

Dr. Leslie Leinwand has been brought on to serve as the Chief Science Officer of CIMB.  In addition to her accomplishments as a researcher, she has co-founded two successful bioscience companies. One of them, Myogen, was acquired in 2006 for $2.5 billion by Gilead; the Gilead Colorado site has since expanded tremendously. CU and the City of Boulder would like to make it attractive for forthcoming business ventures to stay in town.

CU-Boulder is actively attuned to the needs and future of the private-sector biotechnology industry in the Boulder Valley, as well as to its proprietary research and academic goals.  A number of individual contributors to the building fund are prominent business people with links to CU.  Marvin Caruthers is a founder of Amgen Inc. who donated on behalf of his late wife, Jennie Smoly Caruthers, who was a CU professor of biochemistry.  CU alumna Jane Butcher donated $1M in honor of her late husband, businessman Charlie Butcher, bringing their total gifts to CU-Boulder biotechnology to $4M.  Larry Gold is a donor (and friend of the Butchers); a professor of biology at CU-Boulder; the current CEO of SomaLogic, a Boulder biotech firm; and a spokesperson for CIMB.

The Boulder County Business Report cites Gold in a 2010 article voicing the hope that CIMB and its new building will become the "anchor tenant" for the Boulder Valley that the biotech business community needs: "There's a dynamic happening.  There's a role for a consortium of anchor tenants at the CIMB building that gets the buyers associated with the discoveries in this town."

In the past, successful biotech companies have been founded and nurtured in Boulder, but then bought out and moved elsewhere, taking the great minds, jobs and tax revenues with them.  CU's new interdisciplinary biotech facility and aggressive hiring of strong leaders for CIMB will ideally not only incubate but hold onto its intellectual and business capital, benefiting the larger Boulder community culturally and financially.

If you are a life science laboratory supplier and would like to meet researchers, lab managers, and purchasers in the Boulder biotech community, plan on exhibiting at the 13th Annual Boulder BioResearch Product Faire™   event on June 22, 2011.

Other Biotechnology Calendar events in Colorado include: