The University of Southern California received $50 million in bioscience funding earlier this year from retired orthopedic spinal surgeon, Gary K. Michelson, to fund the USC Michelson Center for Convergent Bioscience. The new research building will be used by USC research lab scientists and engineers to produce groundbreaking research in health and similar sciences. One of the center’s aims is to turn biological sciences “into a quantitative and predictive science” and bring about new therapies and cures for diseases.

“Dr. Michelson’s generous gift is truly visionary, as it will bridge USC’s strengths in a broad range of disciplines, including the sciences, engineering, medicine, mathematics and computer science. The new USC Michelson Center will be a vibrant hub for innovation and will help create a major biomedical research corridor in Southern California,” said USC President C. L. Max Nikias.

The 190,000-square-foot new research building will house state-of-the-art flexible labs as well as other centers for electron microscopy and nanofabrication. The building’s research labs will house distinguished faculty such as Dornsife Dean Steve A. Kay, a scientist who has made key discoveries concerning the genetic basis for circadian rhythms of the body and Scott Fraser, Provost Professor of Biological Sciences and Biomedical Engineering, a researcher whose work includes developing a microscope that captures images of the working heart of an embryonic organism as it grows. 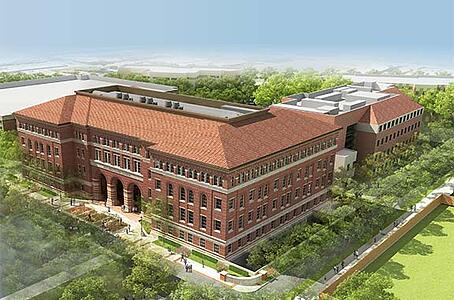 Plans for a new research building at USC

Image courtesy of the University of Southern California

“The gift is all about the promise of this convergent scientific method,” Michelson said. “With the University of Southern California as the place to stand and the ‘method’ as the ‘lever long enough,’ I expect that we will indeed move the world.”

Biotechnology Calendar, Inc. is a full-service science research marketing and events-planning company that organizes life science vendor shows at top research universities nationwide. If you are interested in exhibiting at a life science vendor show closer to home, we encourage you to view our 2014 calendar of events. For more bioscience funding statistics on the University of Southern California, or to learn more about our USC vendor show, click on the button below.