Biotechnology researchers are beginning to unravel the effects of different breeding grounds on cell cultivation. We saw an example of this last year when OSU bioresearchers developed a titanium “shag carpet” which dramatically increased cell proliferation. In a similar vein, researchers at the University of Michigan, Ann Arbor have found a particular type of surface that helps stem cells decide what to grow up to be.

It’s important to note that growing a particular type of cell from a stem cell is seldom a guarantee. Often the colony has impurities; that is, stem cells that grow up to be something other than their intended type of cell.  Thus the goal is to grow a colony of cells that is both large and pure. Assistant professor of mechanical engineering Jianping Fu has taken a large step toward this goal by cultivating stem cells on a squishy surface that is actually a key ingredient in Silly Putty. 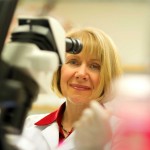 According to Fu, designing microbial carpets out of the stuff has a profound effect on attempts to produce neural cells. Their lab results showed that after 23 days, the colonies of stem cells marked to be spinal cord cells were ten times larges and four times more pure than the ones growing on dishes. "Professor Fu and colleagues have developed an innovative method of generating high-yield and high-purity motor neurons from stem cells," remarks U-M professor of neurology Eva Feldman. She is excited about the research because “discoveries like this provide tools for modeling disease in the laboratory and for developing cell-replacement therapies." Like the mini-heart grown from stem cells at Mayo Clinic, Feldman wants to grow neurons for patients that will be completely compatible, and she thinks stem cells are the way to do it.

Both Feldman and Fu also see potential for this research in determining what factors cause stem cells to differentiate into other types of cells. Fu hopes that this sort of research can be extended to broaden the usefulness and availability of stem cells in the field of medicine.

Biotechnology Calendar, Inc. pays a visit to the University of Michigan each year for its Ann Arbor BioResearch Product Faire™ held annually. The next such show will be held on July 24th, 2014. Biotechnology Calendar is a full service event company that has produced on-campus, life science research trade shows nationwide for the past 20 years. We plan and promote each event to bring the best products and services to the finest research campuses across the country. If you are a university researcher or a laboratory product vendor, consider attending one of our on-campus trade shows; click below to reserve space at the Ann Arbor show or have a look at our 2014 schedule.