Bellur S. Prabhakar (below), professor and head of microbiology and immunology at UIC, has been studying other possibilities. He and his team have been studying the genes of people with type 2 diabetes and noticed a common trend: the mutation or deactivation of the gene MADD. So they ran some experiments with mice whose MADD gene was disabled. Sure enough, the mice had abnormally high glucose levels in their bloodstream.

Curious about the reason behind these glucose spikes, Prabhakar examined the cells in the pancreas, expecting to see a deficiency in insulin. Instead, he found that “The cells were producing plenty of insulin, they just weren’t secreting it,” as he states in a UIC article. The missing gene was keeping the insulin inside the cells instead of out in the bloodstream where it was needed. As Prabhakar puts it, “Without the gene, insulin can’t leave the beta cells, and blood glucose levels are chronically high.”

Next up on Prabhakar’s to-do list is to develop a drug that releases the insulin from these cells so that insulin does not have to be injected into the body. “If this drug works to reverse the deficits associated with a defective MADD gene in the beta cells of our model mice, it may have potential for treating people with this mutation who have an insulin-secretion defect and/or type 2 diabetes.” 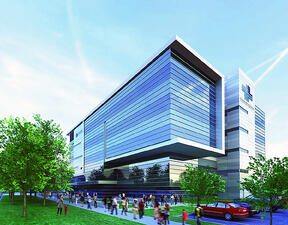 In addition to this exciting research, UIC just opened its largest Mile Square Health Center (left, courtesy UIC) yet. The 122,000 square foot building will offer primary care, urgent care, specialist services, and an on-site laboratory all under one roof. This was funded in part by a $12 million grant awarded to UIC under the Affordable Care Act. To obtain more detailed information regarding funding, research, and development at UIC, read Biotechnology Calendar’s complimentary University of Illinois, Chicago Funding and Vendor Statistics report.

Biotechnology Calendar, Inc.  makes an appearance at the University of Illinois Chicago campus each year for its Chicago BioResearch Product Faire™, held next on May 01, 2014. If you're in the area, we will also be hosting the Urbana-Champaign Bioresearch Product Faire™  on the UIUC campus the day before, April 31, 2014. Biotechnology Calendar, Inc. is a full service event company that has produced on-campus, life science research trade shows nationwide for the past 20 years. If you are a university researcher or a laboratory product vendor, consider attending one of our on-campus trade shows: here is our 2014 schedule of events.