The University of California, Los Angeles (UCLA) holds much pride in the numerous prestigious awards and recognitions that it has achieved since being founded in 1919. From the 12 Nobel Prizes and 12 Rhodes Scholarships, to having more NCAA titles than any other university, and more Olympic medals than most nations. UCLA’s main mission is summed up in just three, simple words: Education, Research and Service; and their outstanding research projects have received $1 billion dollars every year for the past three years.

The University of California, Los Angeles is made up of more than 350 labs, centers and institutes with 290 of those focused solely on research. UCLA takes the lead role in defining great research-oriented universities nationwide, and has claimed 1,800 inventions. According to the London Times Higher Education, UCLA ranked 13th out of 400 universities in the areas of teaching, research, citations, industry income and international outlook. The Shanghai Jiao Tong University's Academic Ranking of World Universities lists UCLA 2nd out of the world's public universities, and 12th overall.

UC Los Angeles currently has 42 projects under construction, or in the pre-construction phase, according to their Master Project List. On this list is the Boelter Hall Laboratory Renovations (right), which will give the Henry Samueli School of Engineering and Applied Science the  necessary wet labs needed for research in sustainability. The planning team estimates the total construction cost to be around $11,900,000 and is scheduled to be completed in November 2013.

Also on the list is the CHS Telemedicine and PRIME Facilities Phase 2 - CHS Clinical Research Wing renovation. The focus of this center is the policies, programs and actions that assist in promoting good health in relation to cultural, social, economic, political and environmental areas. The CHS School of Public Health (UCLA) researches how the above factors influence health perceptions, behaviors and the status of your health in todays economy. 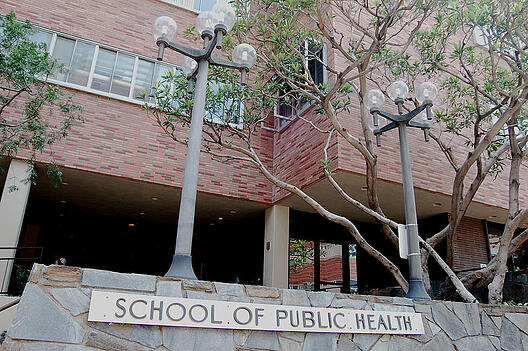 (Courtesy of Wikimedia Commons and Fuzzy901)

The project planning staff at the University of California, Los Angeles believes that upon completing the CHS Clinical Research Wing renovation, it will help with the growth of the telemedicine research activities and will increase the patients healthcare support. The main construction goals are centered around the ability to incorporate the telepathology consultations and lab functions that reinforce the clinical testing of patients in remote areas.

Here are the latest statistics from UCLA:

While the physical features of the university may constantly be changing, the goals, ambitions and dreams remain the same for the faculty and alumni at UCLA. Education, Research and Service are, and will continue to be, their main focus. For life science exhibitors in the greater Los Angeles area who are interested in showcasing their products, Biotechnology Calendar, Inc.'s Biotechnology Vendor Showcase™ Event, taking place April 4, 2013 at the University of California, Los Angeles campus, is an opportunity that you won't want to pass up.