In addition to the $419.5 million awarded by the NIH, the NSF gave the University of Pittsburgh $24.7 million in 2012. The projects awarded research funding span a number of science research disciplines. Projects in the bio field were awarded $3.3 million in total. Of those life sciences projects, the programs of study range from global systems science, evolutionary processes, physiology and structural systems, genetic mechanisms, molecular biophysics, cellular dynamics and function, developmental systems, bio informatics and neural systems. 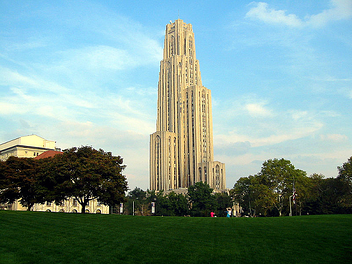 University of Pittsburgh Cathedral of Learning

Biotechnology Calendar, Inc. invites lab suppliers to network with science researchers at the University of Pittsburgh at our next Pittsburgh BioResearch Product Faire™ Event on June 13, 2013. Biotechnology Calendar, Inc. is a full-service science research marketing and event-planning company that runs trade shows at top research universities across the country. For more information on our Pittsburgh BioResearch Product Faire™ Event, or to view more funding statistics for the University of Pittsburgh, click on the button below. If you’d like to learn more about the laboratory equipment sales market at other research institutions, we encourage you to check out our 2013 calendar of events.