The National Institutes of Health have recently been making a push for life science researchers across the country to address gender biases in their studies. In conjunction with these efforts, the NIH announced this September that it will give out $10.1 million in grants to more than 80 scientists studying a range of subjects, as long as the researchers agree to include females in their studies.

“It’s an early first step we’re taking to encourage people to see the value of studying sex as a biological variable,” said Dr. Janine Austin Clayton, associate director for women’s health research at the NIH. “What we are after is to transform how people think about science and therefore transform how science is done.”

Traditionally, life science researchers focus their studies on male test subjects because they believe females’ menstrual cycles are a time-consuming and expensive variable. As a result of the dependence on male animals alone, Dr. Clayton said, “We literally know less about every aspect of female biology compared to male biology.”

Researchers at the University of Utah are on board with Dr. Clayton and seek to address the gender biases inherent in life science research with a study that focuses on sex differences in migraine headaches. Dr. C.K. Brennan, a professor in the neurology department at the University of Utah, specializes in optical and electrophysiological investigations of migraine headaches as well as derangements of brain excitability, especially cortical spreading depression (CSD). 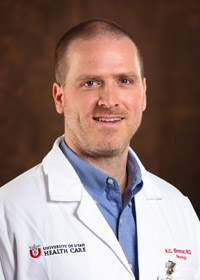 Image courtesy of University of Utah

“Sex differences are the elephant in the room,” Dr. Brennan said. “You want to have both male and female animals, because something that shows up differently in males and females might be a clue to how the disease works.”

Although he admits that using female animals in studies drives up the cost of research, he says it’s important for life science research to include both male and female subjects. It is especially important for females to be included in Dr. Brennan’s research because two-thirds of migraine sufferers are women, and hormonal fluctuations based on the menstrual cycle seem to have an effect on the onset of migraines. Dr. Brennan said he would use his NIH grant to include female animals in his research and double the number of experiments.

If you would like to market your biotech solutions to highly funded University of Utah life science researchers, Biotechnology Calendar, Inc. invites you to exhibit at the BioResearch Product Faire™ Event at the University of Utah on October 23rd, 2014.

To learn more about life science marketing events in other regions of the United States, please see the 2014 schedule and 2015 schedule. Click on the button below for a comprehensive list of research funding statistics and vendor show information for the University of Utah.