A team of researchers from the University of Chicago School of Medicine recently found that an ancient herbal therapy commonly used in Asia is effective in preventing certain heart diseases. (Image courtesy of Wikimedia Commons)

The molecule Honokiol, which is extracted from the bark of Magnolia trees, was found to be effective in protecting the heart from hypertrophy, which can lead to heart failure. The Chicago researchers discovered that Honokiol activates the protein SIRT3 that is involved with slowing aging, reducing stress, and regulating the metabolism.

University of Chicago professor and leader of the study, Mahesh Gupta, explained that “Honokiol, by increasing SIRT3 levels, effectively blocked both the induction and progression of cardiac hypertrophy in mice. It even mitigated pre-existing cardiac hypertrophy. This has the potential to play a significant role in the prevention and treatment of heart failure.”

Even though it is early in the research and there is much more to study, there is potential for Honokiol to be used as a therapy to treat hypertrophy and other heart diseases.

“Although we feel this is extremely promising, there is still much work to be done” said Gupta. 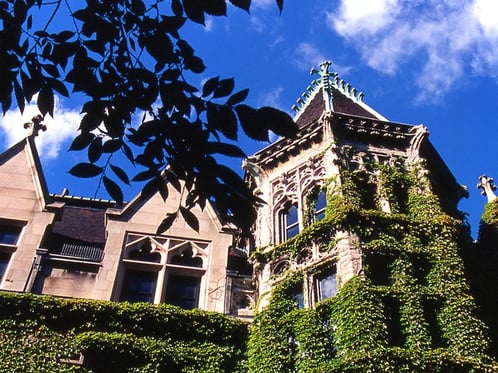 The University of Chicago (Image courtesy of Crimson3981 via Wikimedia Commons)

* Data collected from the NIH RePorter

With so much life science funding being granted to the University of Chicago each year, as well as the immense amount of life science research being produced and published, Chicago is a strong research marketplace. Lab supply companies interested in meeting with researchers, lab managers, lab staff, investigators, purchasing agents, and post-doc students in this highly-regarded marketplace are encouraged to participate in the 1st Annual BioResearch Product Faire™ Event at UChicago on Tuesday, October 6, 2015.

To learn more about participating in the University of Chicago event in October, visit the link below:

To find other events in Illinois and around the country, visit the complete 2015 trade show calendar here: