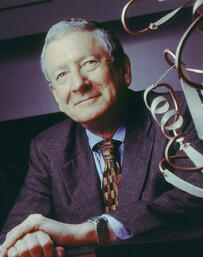 In 2007, Texas voters approved a measure to allocate $3 Billion towards cancer research and prevention, to be doled out over a decade to institutions, researchers and companies in the state. The result is that CPRIT is now the second-largest cancer-research funding agency in the US, after the NIH. (See projects they have funded here. Note 3 main categories for awards: Research, Preventive, and Commercial.)

What is the controversy?

Basic research goals vs. commercialization. While commercializing Texas-based cancer research therapies with Texas companies is a component of CPRIT's mission, scientists on the agency's peer review committee have alleged that commercial applications are being fast-tracked without appropriate scientific review of their merits. The promise to generate revenue trumps hard science, in other words.

The specific project that sparked Gilman's official complaint was an $18M grant awarded to the Institute for Applied Cancer Science, an MD Anderson incubator entity under the direction of Dr. Lynda Chin. While the Institute has lofty goals of translating research into treatment, the application fell short of providing specifics and was never submitted for scientific review. Moreover, Dr. Chin is one half of the power couple that includes her husband, MD Anderson President Ronald DePinho (see our earlier blog), prompting claims of favoritism. This Nature article from June covers the early period well.

What is the Bigger Picture?

CPRIT is headed by businessmen, with the support of Governor Rick Perry. The desire to end cancer through research and prevention is complicated by the economic drive to grow the state's biotech industry. While not always at odds, science and business often have different ways of evaluating worth. While business leaders may acknowledge the authority of scientists and the validity of the scientific review process, they may do so more for the legitimacy it confers on their economic development plans than for any real likemindedness.

When Did it Get Ugly?

This rift in the direction of CPRIT was brought into a glaring light in mid-October when governing board head Jimmy Mansour accidentally hit "Reply All" in a scathing email in which he effectively said good riddance to Dr. Gilman and his Nobel colleague Philip Sharp, who had also resigned. It was picked up by the Houston Chronicle. "Better to get them all out of the way now," Mansour wrote. "Gilman is gone and so is his influence." To which Gilman replied: "They are now in a better position to pursue their self-interests." Nature covered that stage of the controversy as well, in an article titled "Banish Cronyism."

National coverage of the CPRIT conflict and the departure of yet more scientists escalated in the final week of October, including coverage in the Wall Street Journal and Huffington Post, all during CPRIT's annual meeting. Meanwhile, only one mention of the upset appears on the CPRIT website, as a press release on October 11 announcing Dr. Gilman's departure and offering assurances such as: "Any assertions that the peer review process has been compromised or that CPRIT's staff or Oversight Committee members are trying to influence the peer reviewers are false and misinformed."

Nature seems to have shifted to a less hostile position vis-a-vis CPRIT activity, as they published a November 7th piece titled Biomedical Research: Texas Potential (admittedly in the Jobs section) that lauded the Texas cancer institute for opening up opportunities for researchers and strengthening the state's research position and facilities.

CPRIT has 5 more years to disburse state taxpayer-funded grants. With the spotlight of public scrutiny on the agency and an incoming new chief science officer to be hired by the beginning of the next year, we may see greater oversight and approval of the funding process by scientists. On the other hand, the larger battle between business and scientific models (and their bias as to where funding should be directed) is likely to persist. What to invest in, basic science or commercialization?

Lest we paint the picture as entirely one of industry vs academia, though, let's note that the two are already heavily embedded, as the commercialization venture is in almost all cases spearheaded by a researcher him or herself and a desire to market licensed technology. And without industry and initiative, where would research go? Objectivity in the evaluation of merit gets more complex. It is not, however, unresolvable with sufficient resolve--and oversight. (Arguably this need for compromise and mutual determination to meet common goals is one that Congress will be facing in the coming year as well, as science funding falls under the shadow of sequestration.) Meanwhile, Texas marches on, with what may only be a temporarily tarnished science reputation and no leaner pocketbooks. 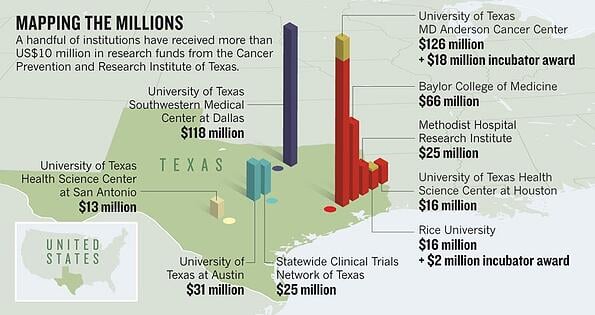 [Where CPRIT funds go, in large measure. Courtesy of The Cancer Prevention and Research Institute.]

Biotechnology Calendar, Inc. will be in Texas on January 31 and February 1, 2013 for two of our BioResearch Product Faire tradeshow events held on these research campuses: