On October 21, President Obama presented the National Medal of Science awards to the 2011 recipients in a ceremony at the White House.  The award program is administered for the White House by the NSF to recognize individuals who have made outstanding lifetime contributions to science and engineering. 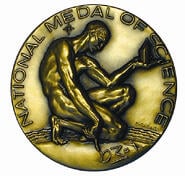 “Each of these extraordinary scientists, engineers, and inventors is guided by a passion for innovation, a fearlessness even as they explore the very frontiers of human knowledge, and a desire to make the world a better place. Their ingenuity inspires us all to reach higher and try harder, no matter how difficult the challenges we face.”

We are proud to profile three of the seven 2011 National Medal of Science winners here:

Professor of Physiology
University of Pennsylvania

For his fundamental contributions to the development and use of transgenic mice. His research has provided experimental foundations and inspiration for progress in germline genetic modification in a range of species, which has generated a revolution in biology, medicine, and agriculture.

Dr. Brinster works in the School of Veterinary Medicine at UPenn, where he received both his undergraduate and graduate degrees.  UPVM subscribes to the One Medicine One Health approach that sees human and animal research as productively overlapping.  For more on this, see our recent blog on the subject: 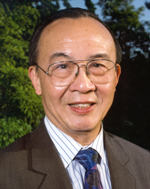 Professor of Bioengineering and Nanoengineering
University of California, San Diego

For pioneering work in cardiovascular physiology and bioengineering, which has had tremendous impact in the fields of microcirculation, blood rheology and mechanotransduction in human health and disease.

Dr. Chien runs the Vascular Molecular Bioengineering Laboratory at the Whitaker Institute, part of UCSD's Institute of Engineering in Medicine.  He received his M.D. and Ph.D. from Columbia University.

For his creative contributions to the development of organic supramolecular chemistry and for his outstanding and unique record of public service.

Dr. Stang has received numerous other medals, including the Linus Pauling Medal, the Fred Basolo Medal, and the F.A. Cotton Medal.  He earned his Ph.D. at UC Berkeley.

In addition to the Medal of Science Awards, the President presented this year's National Medals of Technology and Innovation at the ceremony.  These medals are presented to individuals, teams, and companies for achievement in the innovation, development, commercialization, and management of technology.

Biotechnology Calendar, Inc., in its mission to bring together leading equipment technology suppliers with life science researchers from the best research institutions across the country, holds annual events at all three of the above-named universities, with twice-annual expositions at UCSD.  For information on exhibiting at these venues, click the buttons below:

Our next events at these campuses are on following dates: